Posted by Penge Green Gym at 04:01 No comments:

If you mention rare and endangered species, then one might think of hunters and poachers in tropical climates. However, there are endangered species found much closer to home, some are even in our own gardens.

An Endangered Species?  …In MY garden?

An endangered species is a species which has been categorised as very likely to become extinct. So, it comes as a surprise when you find them in your own garden! However, when determining the conservation status of a species many factors are involved, not only the number remaining, but the overall increase and decrease over time, breeding rates, loss of habitat through climate change and urbanisation, and other known threats. 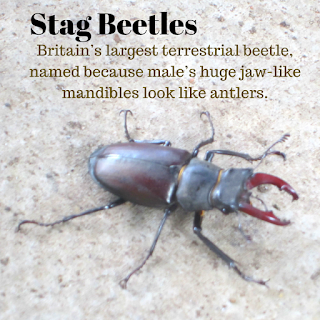 Stag Beetles (Lucanus cervus) are the largest terrestrial beetles in the UK (Only the Great Silver Water Beetle is larger.) Once common throughout Europe and southern Britain they have become extinct in some countries and are globally-endangered. Despite a steep decline in numbers throughout Europe, recent sightings of Stag Beetles, such as from the GiGL map for 2017, show that south-east and south-west London are particular hot spots. In south and south-east London the pattern is consistent with the extent of the old Great North Wood or Norwood, which once stretched from Selhurst to Deptford, covering the Sydenham Ridge and the tributaries of the Rivers Effra and Ravensbourne in an oak forest. Indeed, the first recorded sighting of a Stag Beetle was apparently made somewhere near Anerley around 1899. 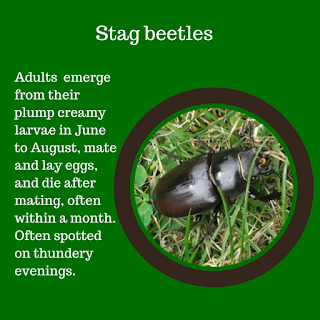 At the Penge Green Gym in Anerley, we frequently see Stag Beetles while gardening either in our own home gardens, or while volunteering in Winsford Gardens, Penge. From June to August, is the best time of the year to see the adult beetles, on sultry summer evenings. The male beetles can fly very clumsily, making a faint clattering whirr. They are between 5cm and 8cm long, and the males have very large, antler-shaped jaws. The females lack the antlers and have smaller jaws.
Gardeners may accidently disturb the larvae (grubs) when clearing up or moving dead wood around the garden. Stag beetles spend most of their lives as larvae inside dead wood such as tree stumps and cut logs. It takes them between 4 and 7 years to grow into an adult. They have an important role to play in eating and breaking down dead wood. 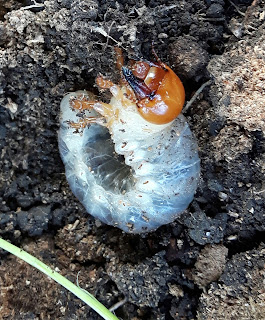 The Decline in Numbers

The decline in numbers has been partly attributed to tidy gardens, parks and greenspaces, so we can help these creatures by leaving dead wood in situ for them and by not removing tree stumps, so that the larvae have somewhere to grow. You can also build loggeries such as those in Winsford Gardens, where tree trunks and branches are dug vertically into the ground and allowed to rot. 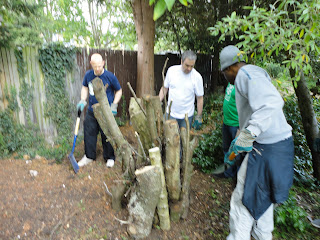 Stag beetles may also be deliberately killed in the mistaken belief they are pests, and road traffic, gardener’s feet, pet cats and other predators also lead to accidental losses.

There is plenty you can do to help them in your garden, so please think about leaving your garden a little more untidy and leaving that pile of logs in the corner.

Posted by Penge Green Gym at 10:37 No comments: